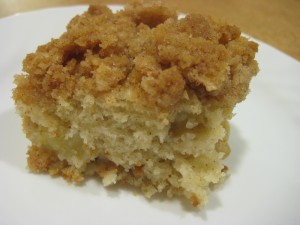 You know what’s really annoying? The fire alarm going off way too early in the morning, JUST as I’ve fallen asleep after hours of cramming. I was so tired that I was debating whether or not it was worth it to get out of bed and go outside, even though I could clearly smell something burning.

This normally wouldn’t be such a big deal, but this is the second time the fire alarm has gone off in the middle of the night in the past week! And I think my lack of sleep made me especially irritable. Grr.

So when I woke up a mere two hours later, I had an extra large, extra dark cup of black coffee with my morning oatmeal. Although I was NOT in the best mood, and I still had two exams to tackle in the afternoon, the prospect of being able to bake later that night got me through the day. 🙂 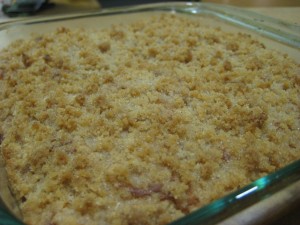 After a long day, and a crazy intense work out session with Ahra, I baked this lovely apple crumb cake with some of the soft, mealy apples (gross!) that we bought over the weekend. It was the perfect way to unwind.

This was the perfect cake to make because the batter could be mixed up by hand, which gave my dying stand mixer a break. The cake was light and fluffy, and there was bit of sweet apple in every bite. Plus, it had a streusel topping, and I LOVE streusel topping!

After just one bite, I almost forgot about the silly person who decided to burn their toast at 4:30 in the morning. Dessert always makes me feel better! 🙂

Source: adapted from The Amateur Gourmet, originally from Brunch by Gale Gand

2. To make the cake, whisk together flour, baking powder, sugar, salt, and cinnamon in a large bowl.

3. In a separate bowl, lightly beat the egg, then whisk in milk and melted butter. Pour wet ingredients into dry ingredients and stir until just combined. Fold in chopped apples.

5. To make the streusel topping, combine sugar, flour, and cinnamon in a small bowl. Using a fork (or your fingers), work in the butter until evenly distributed. Sprinkle topping evenly over top of the batter.

6. Bake in preheated oven for 30-35 minutes, until top is golden. Cool in pan, then cut into squares and serve. Store at room temperature, covered, for up to 4 days.